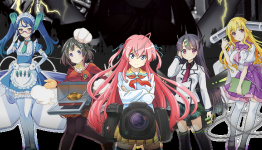 RN24: Released a little less than two months ago, smartphone game Touken Ranbu, with a cast of characters made up of famous swords from history transformed into handsome young men, has proven itself to be a solid hit. It’s just the latest success story, though, in the established video game genre of “many attractive people who’re actually anthropomorphized [something].”

Still, samurai swords seem like a pretty good well to draw from in creating heroic video game characters. But can you replicate that kind of enthusiastic response with household appliances and consumer electronics though? We’re about to find out, with the upcoming title Kaden Shojo, which has you saving the world with a the help of a toaster, washing machine, and refrigerator, all of whom, of course, take the form of cute anime girls.

Kaden Shojo Is Like KanColle, But With Household Appliance Girls