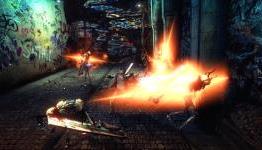 PS:
You can almost feel Ninja Theory's middle finger protruding out of DmC: Devil May Cry - Definitive Edition, a remastered version of its polarising 2013 reboot. Rather than settle for a simple visual overhaul, the Cambridge-based developer has delved deep into the core of its divisive PlayStation 3 title, retuning aspects of the urban overhaul specifically to the tastes of those outspoken aficionados that lambasted the original even prior to its release. But with a changelog as long as Dante's famous Rebellion rapier – which includes such miniscule modifications as the removal of Vergil's fugly fedora – does this stand any chance of winning the affection of the series' stubborn stalwarts?