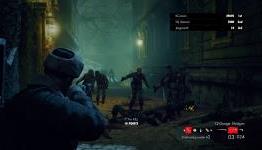 AOTF:
It is pretty crazy to think that it has been 7 years since that fortuitous week of gaming history in November of 2008 when both Call of Duty: World at War and Left 4 Dead was first released to the masses, bringing us the joys of fighting zombie hordes and introducing us to the concept of “Nazi zombies,” as if we needed more reason to kill zombies in the first place. Heck, it’s been 6 years since Left 4 Dead 2 was released in order to capitalize on how popular the whole co-operative zombie shoot’em up thing was becoming. It has been a long time since we’ve had a proper zombie co-op shooter come out, but if you’ve got that itch to scratch, then there is a new ointment on the market in the form of Zombie Army Trilogy.

Reads pretty well. Though it looks like review scores for ZAT are all over the place (ie 64 on MC). Not the end of the world, I'll def try this later on down the track.

The game has no story. Run around, shoot zombies, run around, throw grenades at zombies...

Move to the next area...

Run around, throw grenades at zombies...

A completely dumbed down game.