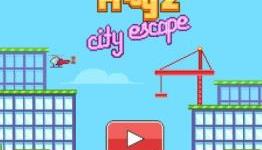 Following the success of the original Hoppy Frog, Turbo Chilli now has an iOS/Android sequel for casual mobile gamers around the world, Hoppy Frog 2 – City Escape. The game puts you in control of the titular character as “he finds himself on the wrong side of the law” and tries to make a “mad dash for freedom” – as it turns out, he’s been framed by Sharky and wrongly accused of lake pollution. And it’s your job to take Hoppy to freedom and avoid Sharky and his scooter-riding gang known as “The Fins.”

Hoppy Frog 2: City Escape - How to get the secret mystery characters