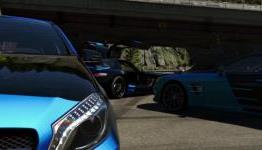 Driveclub PSN Plus Version Still In Development, New DLC Pack On The Way

The PSN Plus version is far from dead, at least that’s what Evolution Studio’s:

”We continue to work on the servers needed for the PS+ Edition to release it ASAP,” the studio wrote. “While we do, the teams not able to support the online work are adding new cars, tracks, events and improvements for everybody already playing the game.”

How could a not complete version be missing when the full game is out.

I'm not quite sure what you mean?

The PSN Plus version isn't just a version with it's own severs. I'd assume they need time to crate the content and severs for the PSN + version, instead of crashing the game all over...again

Don't try to defend it. The full game has been out for months now and the Ps Us version was supposed to be basically the same thing but a limited version which should not be hard to make since the game itself is finished.

I honestly don't think it is coming

It's not been released yet because it will undoubtedly crash the servers. It took them weeks/months to sort it out the first time around and they are not about to open the flood gates to every PS4 owner for it to go horribly wrong again.

That's my take on it at least.

Probably waiting on replays and whatnot to be added before releasing it. Might as well make the game they want to hook people to be the best version.

Sony are lying their a** off. If this was Microsoft, all hell would have broken loose by now...

Sony have been getting quite a few free passes this gen by it's fanboys and by the gaming community in general.

WHAT GAME STRUGGLES TO PUT OUT A DEMO *AFTER* THE FULL GAME IS ALREADY OUT.

THIS IS A JOKE!

I they WANTED to put it out with servers able to handle it, they would.

Regular people will never know the shameful disaster that the PS+ version of Driveclub has been. It has gotten to the point that no amount of smooth launch, gameplay, and servers will ever redeem this steaming pile.

I LOVE my PS4 and almost all the games on PS+, but every article I see on Driveclub that doesn't say "Free Edition Out Tomorrow" really pisses me off.

The games obviously finished, it's the servers that would be the problem, I thought everyone knew that, it's been widely reported

suuuuuuuure it is.. :P

10 months later "Hey guys were still making the PS+ Edition of Driveclub"... Just give us the whole game for free or replace it with something else. Cause i have a feeling That the PS+ version of driveclub will never come out

I don't want a super late dumbed down version. Give me the whole game or a new one, because we pay for 6 games a month and that's one of them.

Honestly, it's absurd at this point.

They should seriously just skip it. Any statements to the news media about DC and PSN+ version, quickly turns sour, and only contributes negative press towards their own company.

Might as well release the full version on plus.

Its been way to long to release a demo of the game.

I don't pirated or hack every game I play. Yeah I was curious about the game because Xbox fans hyped it up.

You got the wrong fans doing the hyping, buddy.

How is this taking so long? I mean I already have the full version so I don't care, but geez, just release it already.

Still in development, not make me laugh.
What is to develop in already finished game which you can buy on PS Store.

The ps sub will expire prior to it being released which was the entire point of getting the game WITH the subscription.

Never play mp so a complete lie and wasted money. And I quit renewing live years ago.

I think they should ban non driveclub psplus edition 'news' until there is actually some to report!!!

I AGREE! Wait, nope, no I don't. The post clearly contains news on DLC for the retail version as well. Silly.

But the headline starts with 'Driveclub PSN Psplus version' Why when there's nothing to report on the subject? Gotta get dem hits anyway u can I suppose but your headline actually put me off bothering reading the article! I'm sure others did the same too! silly

Clearly is something to say on the topic though isn't there? How hard is that to understand?

So you're reporting that there's nothing to report then? Journalism at it's best!!! What a joke!! HaHaHa

Just give us the full game for free EVO studios and save at least some of your reputation.

What a cluster the Driveclub PS+ offering turned out to be. Still in development? Gimme a break. More like the game was so hugely over budget that they simply HAVE to keep charging money for it. PS4 is doing great on the sales front, so I guess Sony is in no rush to fulfill promises that were made before the system was available to buy.

It’s the End of the Road for Driveclub

Sony Is Shutting Down SingStar And Driveclub Servers In 2020