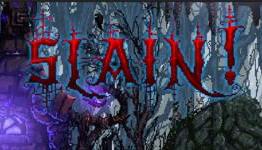 Slain Successfully Funded on Kickstarter with Time to Spare

Carl Williams writes, "Late last year we covered Slain, previously called 7 Towers, and how it was coming this year. The team behind Slain have since then put the game on Kickstarter and just recently successfully passed their minimum goal. Now Slain will finish its Kickstarter run in about 18 days so there is plenty of time to raise additional funding. What is interesting about Slain is that apparently it will be coming to a plethora of platforms after the base funding, which they just reached, is reached. Action fans that are also into horror movies, or Splatterhouse, should feel right at home with Slain."

Adhttps://store.steampowered.com/app/1488200/Symphony_of_War_The_Nephilim_Saga/?utm_source=n4g&utm_medium=native&utm_campaign=sow_n4g_native&utm_content=png
- Comments (0)+ Comments (0)
TopNewestOldest
The story is too old to be commented.
230°2

Digital Flash Discounts with all the prices

Review - Slain: Back from Hell (Steam), Raging On and Off Screen - TICGN

Slain Back From Hell, but Gone for Good?

Slain: Back from Hell to Launch on PlayStation 4 and Xbox One This Fall

Slain: Back from Hell to Launch on Consoles this Fall