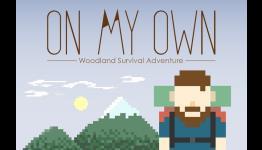 On My Own With the On My Own Early Access - Cliqist

Marcus Estrada writes: "On My Own looks like the kind of game that folks are really into these days. It’s pixelated and all about surviving as a lone bearded fellow in a vast landscape. Despite the fact that folks can play it through a Android/iOS preview or an actual Early Access build, Beach Interactive’s Kickstarter has just barely made it way to their $2,500 funding goal. At the time of this writing they just hit $2,500, so hopefully things go smoothly and they remain successfully funded! I say this as someone who has played the Early Access release and believe On My Own is on track to be a cool, new survival game given enough continued attention."

On My Own Wilderness Survival Sim Release Date Announced

Get Ready to Fight For Survival in On My Own

On My Own Cheats, Codes & Walkthrough/Guide/FAQ - PC Computer