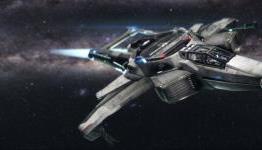 Would You Like to Test Out Star Citizen? Here’s a Free-Trial

Are you looking to become a part of the world’s largest crowd-funded space simulation game in history? Thanks to a promotion offered by Star Citizen developer Cloud Imperium Games, now is your chance to get a taste of the action!

Well looks like its time for me to try it out thanks :-)

Not too bad. I bought mine and I LOVE IT. It's a little rough right now, but you can see the quality of the game first-hand. The crew with work out the bugs and kinks, but the work in front of that is just beautiful.

Do you get access to the multiplayer when you buy into it or is that still limited access to lucky folk?

Thanks for the info!

That's actually really nice, I've been wanting to try it first before committing to a buy.

I'm gonna have to jump on this.

~A space pirate is born~

The "PAXEASTFREEFLY2015" coupon code says invalid when trying to redeem it.

I get the same thing. Wounder if they fixed it or something?

Wondered how long after code appeared freely on the net they would block the code.

Yep, immediately made me sad.

Thanks for the heads up! Worked just fine.

Thanks for pointing out the correction. Helpful bubble!

Got around 20-25fps at 720p on low settings with a 7750 and 8120. If you're unfamiliar with the GPU and CPU, it's slightly under or just as powerful as a xbox one. I was surprised it was somewhat playable, but then again i was in free roam with no other ship but mine while roaming.

" it's slightly under or just as powerful as a xbox one"

Soooooooooo I would really, really read up on what you think is um.."powerful" or "slightly under" its not even close to a XONE or PS4's peak performance.

invalid code, they probably caught on to this

Serious question for people that have bought ships. What happens when your $500 ship gets blown up by someone with a $1,000 ship. Does it just respawn or do you have to spend another $500?

No most ships come with 3 months of insurance, when you buy them. once your insurance is up you use in game currency to buy more insurance. if you fly without insurance and get blown up, you are boned.

Agree 4Disagree 0
▼✖-+
SPAMInappropriate
Show all comments (27)
The story is too old to be commented.
30°Fresh