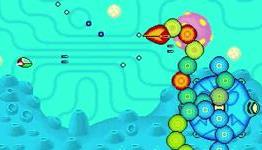 If there’s one thing that STGs weren’t doing in the 1980s, it was deploying candy-colored games that had more vivacity than a ball-pit at Chuck E. Cheese. In fact, most shoot-‘em-ups at the time were dark, dreary tales of mankind stubmling upon some kind of enigmatic, alien race hellbent on destroing the universe. It’s clear to see, then, that Sega’s take on the shmup franchise caught some off guard at the time of its 1986 release. But don’t let the neon fool you — this is just as difficult as all the other titles in its genre whilst crushing its players’ hopes and dreams with cuteness. But that’s why this is such a quality experience; there’s just something endearing about a game that will eat players for breakfast, all the while assuming the absolute least suspecting appearance around.

Adhttps://store.steampowered.com/app/1488200/Symphony_of_War_The_Nephilim_Saga/?utm_source=n4g&utm_medium=native&utm_campaign=sow_n4g_native&utm_content=png
- Comments (0)+ Comments (0)
TopNewestOldest
The story is too old to be commented.
20°
8/10