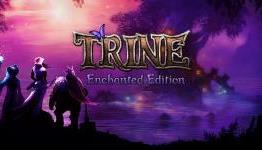 Nintendo of Europe Reveal Trine: Enchanted Edition Due on eShop Before End of March

Nintendo of Europe today confirmed that FrozenByte’s remake of the original Trine, will be available from the Wii U eShop before the end of the month. Trine: Enchanted Edition features numerous improvements upon the original game and was made possible thanks to strong reaction Trine 2 received when it was released on the Wii U at launch.

Adhttps://www.releases.com/?utm_source=n4g&utm_medium=native&utm_campaign=c1
- Comments (0)+ Comments (0)
TopNewestOldest
The story is too old to be commented.
60°

Trinelogy Listed For Switch By PEGI