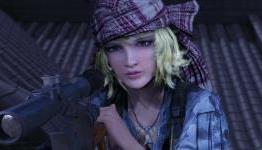 Five Upcoming Wii U Games To Watch Out For

Geimaku: "The most important difference between the current gen of game consoles are the games. That’s what most gamers look at when deciding which console to buy. To help you decide, we’ve listed five upcoming games for the Wii U you can be excited about."

Awesome list. I don't yet own a Wii U but some of these titles definitely may convince me to pick one up later this year.

Dude,what are you waiting for? Now is the time to get a Wii-U with all the amazing software, what more can you ask for? Jump on board man.

Devil's Third, in particular, is looking like it will be the mature online multiplayer shooter that Wii U gamers have been asking for, for ages, but never really got from people like Activision.

Great gun play mixed in with well-done melee mechanics.
Tons of extremely cool [and sometimes frightfully strange] customization options for your characters [giant cat head, anyone?XD]
Plenty of extra guns and melee weapons to unlock.
Different kinds of fun online multiplayer modes that haven't really been seen in any other shooter.
Keeping up the standards of other shooters by providing voice chat and clans.
Decent health and defense parameters to the players so that they don't feel like they're made of wet tissue paper...

Oh, and did I mention the stage builder?

Yeah.
THEY'RE LETTING US MAKE OUR OWN MAPS.
IN A WII U SHOOTER.

Am I the only one who's really happy about that?
After two full CoD games that didn't even get their full amount of DLC maps, suddenly we're getting a shooter that gives us the opportunity to make as many maps as we want?

That, is how you please an audience that has been looking for better treatment.

It also helps that the story looks interesting, and although we haven't gotten any new looks yet, apparently they've done great things for the graphics since those early build trailers, so we'll see how that goes. [though I get the feeling that the elitists will slam on it regardless of how much they've improved it just because it's on Wii U]

Devil's Third is exciting because we don't get too many "for fun" multiplayer games (at least not for consoles), games like Timesplitters that don't take themselves too seriously, just zany and over the top shooters.

I'm interested to see how it has advanced as well. The sandbox multiplayer is intriguing, my guess is we can create and upload stages and set-ups. Visually the game didn't look that bad at E3, considering its development history for last-gen consoles and having changed game engines.

I like it when people disagree with me! When people don't say why I think they're weak.

As soon as the haters stop worrying about stuff that should have no bearing on them like sales numbers they might just realize what an awesome system the Wii U is. There are tons of great games and many more to come!

Devil's Third fits in some where? LMFAO!

Still not enough for me to get a Wii U this year, I'd rather just get one used next year. Too many great games coming out in fall, to spend a few hundred on just 2 games...

Devil's Third is worth a dozen of any of those games you mentioned, to a fanbase that has gotten mostly trashy ports from lazy third party developers for their latest system.
Hell, Xenoblade X and Zelda alone will give more replay value than the majority of that list, and most of them are gonna be out on PC as well, or have equivalent games that beat them in quality, which doesn't even make them special.

Way I see it more AAA exclusives are coming to the Wii U then any other system. I have an Xbox 1 and the only great games so far I have played are Dragon Age Inquisition, Alien Isolation, Dying Light, and Sunset Overdrive. Everything else has been pretty meh so far.

Only games I'm excited to play this year on the Xbox 1 is The Witcher 3, Batman Arkham Knight, Dead Island 2, State Of Decay and the new Tomb Raider game. That's it... 5 games for the X1.

The Wii U on the other hand... Since December I have had and will have...

Plus all the Virtual console and Indie games that are coming.

Also E3 is only a few months away who knows what else Nintendo is dropping in 2015.

I will and always will stand by Nintendo. Don't care what anyone else thinks or says.

Uncharted 4, Dead Island 2, The Division, Bloodborne, RER 2? HAHAHAHA! Thanks for the laugh man, made my week.

No. Youre a sony faboy troll and a hypocrite as proven by MiyamotoSon.

I'll be playing Uncharted, Zelda, Bloodborne, Batman, Starfox, and many more this year, while you are busy acting like a jackass.

Enjoy half of the great games coming this year.

agreed thats why i have both ps4 and WiiU, and also new 3ds xl, and vita.

Zelda - which no doubt will be up for GOTY as every other version of the game has been - is "meh" now??

I love how Dead Island 2 or Batman is now suddenly more important or influential to the gaming world than the Legend of Zelda.

keep drinking the kool-aid my friend.

Your nut's and your loss dude! Your list looks so meh to me!

wii u looks like it is turning out to be an awesome console.

They either need to show something for SMT X FE or just say that it's canceled. It's been how long and they haven't uttered a single word or concept art? This could be this generations Agent where they announce it and then never speak of it again. As for Fatal Frame they haven't even confirmed it's coming to the west (Which I hope it does along with FF4). Good list though. Starfox would have been a nice edition to the list as well as Splatoon.

Satoru Iwata simply announced Fire Emblem X SMT too early and had nothing to show about it. The good news is Nintendo producer, Fire Emblem series producer Hitoshi Yamagami said the game's development was still on track as of June 2014 @ E3. Here's his comment about it: "We're right on schedule, but if I answer in any more details I will lose my job, so please have mercy on me."

I'd like to see Fatal FRame 5 localized as well, but quite frankly, it's likely not worth the cost to do it since the series is so niche. We'll see what happens later this year though.

it only been two years since announced it was starting development

i just got a WiiU and i LOVE IT! the only thing that bothers me is i thought i could play gamecube games, but its still better than i ever thought it would be!

Please keep in mind that when you have your Wii U hooked up to an hd tv via hdmi your Wii games will project in hd!!! It's a pretty cool feature!!!!!

I've played Wii games on Wii and Wii U on an HDTV. I see virtually zero difference between one output and another.

Wii games don't run in HD when you play them in a Wii U. I don't know where this false notion comes from. They still run at 480p.

I was actually hoping by now that we would have gotten more GC to WiiU HD remakes. I know that the WiiU won't be Nintendo's best selling console to say the least, but I just hope that Nintendo uses this time to establish new franchises and make some of the old ones relevant again in time for their new handheld and home console.

I say let's wait until the end of this generation to call a winner!

People keep saying they want SMT X FE but how many of you have actually played SMT?

I have, it is a really strange game.

Played all the main ones, a few personas, devil survivor, soul hackers, and overclocked

Good list but Star Fox should be here instead of a game that may or may not be coming to the West.