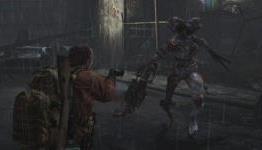 We were slightly concerned about whether Capcom would go off the rails with Resident Evil Revelations 2, seeing as the 3DS' hardware limitations had as much to do with the satisfying old-school gameplay as any purposeful design decision. However, it seems to be off to a flying start.

"The game itself is solid Resident Evil fare though. The locations change throughout the episode (no faffing around one mansion for hours here), and the forest scene in particular is as chilling as the series gets. Faithful fans will love it." - Resident Evil: Revelations 2 Episode 1 - Penal Colony Review

"Episode 2 has some of the best moments I've experienced in the whole Resident Evil franchise. If Capcom can maintain this intensity and not give in to all out action (easy on the Assault rifle, Barry), they may be about to bring the series back to its prime." - Resident Evil: Revelations 2 Episode 2 - Contemplation Review