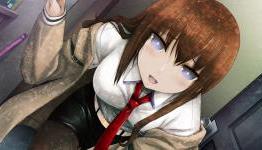 Partial nudity, sexual themes and more detailed for the PS3 and Vita releases of Steins;Gate

ESRB release details on the partial nudity, sexual themes and more from the PS3 and Vita releases of Steins;Gate.

I... don't remember much of anything being sexual in Steins Gate except for like one quick scene. And it didn't even show much.

Well, Daru made lots of sexually suggestive comments and was the resident 'perv' in the anime.

There weren't any major nude scenes or anything that stood out (that I can recall), but there was definitely lots of innuendo.

Hehe yeah he did. I'm just confused as to why the ratings there on the game. And the screenshot in the article looks so lecherous lol.
Besides Darus jokes, the anime isn't lewd or anything.

Steins;Gate was an amazing anime, will definitely play the VN

Seeing how the anime was based off the game, there is no doubt in my minD that this game will be incredible. Can't wait for a release date.

Are visual novels not video games? I've played a few before and would definitely classify them as games as well. As long as I am making any sort of input towards the advancement of the story I consider that a game. Danganronpa series were 2 of the best games released in 2014. Virtues last reward was also an incredible 'game' that I ended up playing 8 hours a day until I got the true ending.

Bargain! Let's see what all the fuss is about.

prepare for a lot of reading though, this is a visual novel. If you can stand it however, amazing story inbound, perhaps one of the best you'll ever see.

I hope people realize VN aren't games and go in thinking they are. That being said I like the VN over the animu.

And with the voucher code, the price is brought code to £15.18. Unfortunately, the deal has expired some time ago.

f* yh!one of my favorite anime

JAST are the ones handling pc-version, not PQube. But with the recent trends pretty sure they'll release Steins in Steam soon enough.

I don't know a lot about Steins; Gate but I hear great things from it, if there's a physical edition then I'll buy it for my Vita day one. If not then I'll probably wait.

Got to cater for that ps4 fan base

Best Visual Novels You Should Definitely Try Out

Which Steins;Gate version is best for you?

What do you need to know about the Science Adventure visual novels?