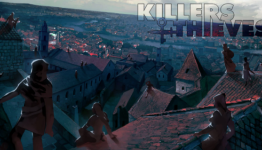 "Stoic Studio's Alex Thomas, who worked on last year's The Banner Saga, has recently broke away from the team to work on an all new title called Killers and Thieves (also at Stoic). The game is described as a procedurally generated stealth game that has players taking on the role of the head of a thieves' guild and looting randomly generated levels."