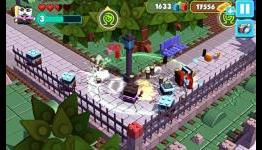 Taking on Lego, Skylanders and Disney Infinity, Sick Bricks is the latest toy-powered videogame, which – while sticking to the brawling, puzzles and fetch quests of the popular Lego titles – also introduces irreverent characters and peculiar vehicles by scanning the physical bricks through the camera. The app is free to play with a basic set of heroes, but retail packs then add single or multiple characters, such as phaser-touting Tiberius Warpspeed or Hiro Thunderbutt, who comes wielding (inevitably with that name) a fart attack.

Adhttps://store.steampowered.com/app/1488200/Symphony_of_War_The_Nephilim_Saga/?utm_source=n4g&utm_medium=native&utm_campaign=sow_n4g_native&utm_content=png
- Comments (0)+ Comments (0)
TopNewestOldest
The story is too old to be commented.
20°
4/5

A Closer Look at Character Beaming in the Upcoming 'Sick Bricks'