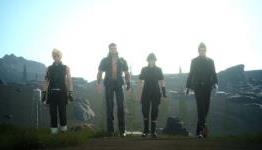 Final Fantasy XV is the sort of game that feels almost surreal to actually be playing. First announced nine (!) years ago, as Final Fantasy Versus XIII, the game has undergone so many design and staff changes that many probably assumed it would never be completed at all. There’s still no actual release date, and it’s unlikely to be out this year, but a demo will be released this month as a free bonus with Final Fantasy Type-0 HD. And we’ve already played the first hour of it.