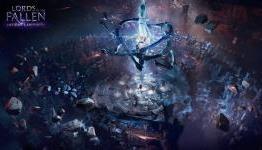 DC:
Back in November, I reviewed Lords of the Fallen (LOTF) on PS4 and enjoyed it. I actually took the game up on PC not long after that review as I finished building a new gaming rig -- and my goodness did the game look great, by the way. But, I was one of many who had some serious bugs to contend with, so I let things simmer, waiting for patches.

Several patches later, including one earlier this month, I decided to pick it up again and restart my campaign. I went the Warrior route with a heavy emphasis on Faith. After about eighteen hours in, I just defeated Beast, and it's at this point that the new DLC, Ancient Labyrinth, becomes available. The reason for having players "wait" until beating Beast, I suspect, is because Ancient Labyrinth provides a stout challenge thanks to new enemies and a hellaciously difficult new Rhogar Lord known as The Keeper.

Adhttps://store.steampowered.com/app/1488200/Symphony_of_War_The_Nephilim_Saga/?utm_source=n4g&utm_medium=native&utm_campaign=sow_n4g_native&utm_content=png
- Comments (0)+ Comments (0)
TopNewestOldest
The story is too old to be commented.
70°
3/10
5