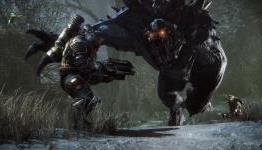 TDF:
When Turtle Rock Studios first appeared on the radars of gamers with the superb survival horror shenanigans of Left 4 Dead, it was clear what this studio was about - creating collaborative gaming experiences for players. What made Left 4 Dead so special was the director AI, pulling the strings of the enemy and measuring when to up the ante, which typically was just as you felt you had a moments respite. It’s this notion that Turtle Rock have taken further with Evolve, which principally is another team-based survival-horror game, but one that removes the idea of an AI director and lets the players build their own experience.

Adhttps://store.steampowered.com/app/1488200/Symphony_of_War_The_Nephilim_Saga/?utm_source=n4g&utm_medium=native&utm_campaign=sow_n4g_native&utm_content=png
- Comments (0)+ Comments (0)
TopNewestOldest
The story is too old to be commented.
100°5