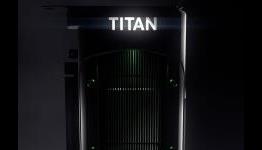 Digital Foundry:
Nvidia has done it again. Just like its predecessor two short years ago, the evidence suggests that the new Titan X will be the fastest single-chip graphics card on the market, loaded down with enough RAM to cope with even the most demanding games - most likely with plenty more to spare. And again, similar to its predecessor, we should also expect the Titan X to be inordinately expensive - an aspect that only seemed to make it even more desirable to enthusiasts back in the day, if sales figures are anything to go by.

Right now, not much is known with absolute certainty about how powerful the Titan X is - but it was the GPU of choice for VR demos at last week's GDC 2015. Crytek used it for the Back to Dinosaur Island demo, while Epic showcased WETA Digital's Thief in the Shadows and its own Showdown demo with the new technology. We can reasonably assume that it's more powerful than the current top dog, the GeForce GTX 980, but to what degree?

Are graphics cards and other gaming PC components becoming too expensive?

RTX Remix Could Revolutionize Modding, Even If It's Not Compatible with DX10+ Yet