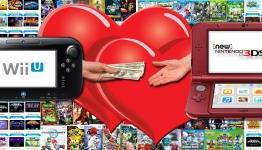 Nintendo has finally caved and introduced their first cross-buy system to their eShop. AUTOMATON's Graham Arthur explains what this could mean for gamers, and breaks down exactly what is happening with Nintendo's new cross-buy system.

I'm a bit disgusted with this article. It begins with the assumption that cross-buy should be available to games on multiple platforms, as to not be 'locked' on one system. Arguments are made to illustrate that Nintendo is lagging behind Microsoft and Sony, in which gamers "automatically assume" that you can use that game on multiple devices. I can understand this. I also like the idea of not paying for the same game twice, especially when we're just talking about data, not a physical item.

Yet, when the writer looks at Tipping Stars and OlliOlli, Tipping Stars is automatically praised because it can be used against the intent of the company, to sell to another individual or giving it away free. The writer even goes so far as to suggest that this is Nintendo's intention - trying to justify a practice which definately slashes potential sales. OlliOlli's method is really very intelligent, but he really doesn't say anything good about it - honestly, it's not "easier" to purchase an item with a credit than to put in a download code. And he makes sure to repeat several times that you can't "do anything with your extra game" if you don't have the second system, and that you're "locked in" with OlliOlli's method.

Really? It's CROSS-BUY, not BUY ONE GET ONE FREE. Don't whine that one method doesn't allow a loophole that the other does.

I hope that Cross-Buy continues, but that it follows OlliOlli's method. I think that Tipping Stars' method is going to make it sell poorly, which will discourage future games like this.