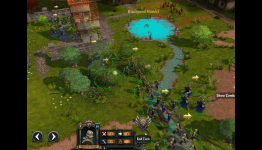 DD:
Slitherine has really established itself as the premier developer/ publisher of serious strategy games on iPad. It is releasing games at a rapid rate, and from titles such as Pike & Shot and Battle Academy 2 through to the likes of Commander: The Great War and Panzer Corps, the quality has been consistently high.

Hell is a deviation from the norm, though. A swords-and-sorcery fantasy strategy game, rather than the team's traditional historical wargame, Hell was developed in collaboration with another genre specialist in Hunted Cow, and while it's an admirable effort, there are a couple of thematic issues with this one that lets the underlying mechanics down.

Adhttps://store.steampowered.com/app/1488200/Symphony_of_War_The_Nephilim_Saga/?utm_source=n4g&utm_medium=native&utm_campaign=sow_n4g_native&utm_content=png
- Comments (0)+ Comments (0)
TopNewestOldest
The story is too old to be commented.
10°
4/5

TouchArcade: 'Hell: Fight For Gilrand' Review - War Is Hell, But This Game Isn't