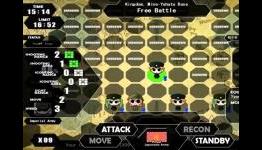 DD:
Human Tanks plays out much like an anime with opening credits at the start with a theme song, and ending credits with its own song at the end of each of its numerous episodes. Each episode consists of a story that plays out much like a visual novel, and will then transition to some gameplay and then return to story once more after you complete the level. The gameplay segment is a turn based tactics affair that plays out a bit like Battleship mixed with Fire Emblem and other such strategy titles. At the start of every level and in the intermission after each episode you can assemble more Human Tanks to fight on your side, but this costs supplies which you acquire by beating levels.

Adhttps://store.steampowered.com/app/1488200/Symphony_of_War_The_Nephilim_Saga/?utm_source=n4g&utm_medium=native&utm_campaign=sow_n4g_native&utm_content=png
- Comments (0)+ Comments (0)
TopNewestOldest
The story is too old to be commented.
30°
8/10

War of the Human Tanks – ALTeR Blasts onto Steam

War of the Human Tanks – ALTeR Arrives on Steam This Winter