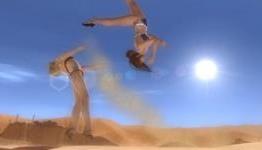 PSNation:
Partial nudity and sexual themes, that’s part of the ESRB description for Dead or Alive 5 Last Round, which is enough to get any hormonal teenager interested and obviously part of its demographic but once you get past the visually appealing bodies you are left with a solid fighter that can hold its own with the best of them. Just like its nearly identical older version on the PS3 it has some extras from the Vita and DOA5 Plus versions along with a fan requested feature: two-on-two tag team battles, which should please the online multiplayer community. As well as gameplay tweaks it includes more stages and characters. Not to mention all the DLC you own already still automatically carries over.

Adhttps://store.steampowered.com/app/1488200/Symphony_of_War_The_Nephilim_Saga/?utm_source=n4g&utm_medium=native&utm_campaign=sow_n4g_native&utm_content=png
- Comments (0)+ Comments (0)
TopNewestOldest
The story is too old to be commented.
180°3

The 10 Most Expensive Microtransactions And DLC In Games, Ever

Marie Rose: The making of Dead or Alive's doll-faced superstar

Dead Or Alive 5: Last Round Will Be at EVO With New Side Tournament

DOAHDM Beach Paradise 6.0 is in the works - Dead or Alive 5 will get even more lewd in the future