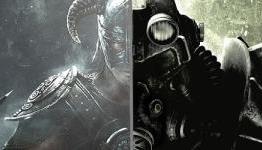 'Elder Scrolls 6' or 'Fallout 4': Which one will Bethesda bring out first?

Gamers have been wanting to know what Bethesda is really up to, pining to learn which of the two — "Fallout 4" or "Elder Scrolls 6" — will actually see a release date or if either one will ever make it out the door.

I would be ecstatic for either to be honest, but I also feel like we will see a new Fallout first. I'm not getting my hopes up though, I will just wait and see!

Yep either game will have tons of content and hours to be put in which is great.

Fallout 4 or GTFO. Simple as that.

I would prefer TES 6 but am expecting fallout and am happy either way.

Personally I want Elder Scrolls. That being said, I think they'll debut Fallout just because of the timeline.

It's got to be Fallouts turn, I'll be happy with a new ES game but I would prefer Fallout 4

Right now I prefer ES games but it's been too long since I killed a roamed the Wasteland.

Fallout 4. I think we might get an Elder Scrolls towards the end of this gen like they did with Skyrim.

But they also released Oblivion at the beginning of the last gen. Skyrim took a little longer when they had to build a new engine (which they may or may not need to do this time). I agree with you that Fallout is more likely, but I wouldn't be surprised by a new Elder Scrolls either.

I was just about to correct you on Fallout/Fallout 2 - but they were published by Bethesda, I had no idea!

Fallout 1 & 2 were published by Interplay. Bethesda had nothing to do with them. Bethesda didn't grab Fallout until 2004, and the first two Fallout games were in 1997 & 1998.

The team that made Fallout 1 & 2 eventually became Black Isle Studios, which then ended when Interplay got stupid, they split and formed Troika Games and Obsidian Entertainment. Troika didn't make it.

I guess I was right in the first place! Bethesda do now publish it apparently, both google and wikis showed Bethesda as the publisher for both 1 and 2.

I still hope for a Fallout return!

The reason the wiki shows Bethesda as a publisher is because they bought ALL of the rights in 2004, plus the wiki lists all publishers for the entire series in the list.

I'm looking right at the original Fallout 1 and 2 boxes right now and there's no Bethesda on them. They were made and published by Interplay.

Really loved Fallout 3 so it must be Fallout 4.

Yeah it all depends on YOU alone King Trixterz.

By the order of King Trixterz have Bethesda reveal Fallout 4 at E3 2015.

Whatever game runs over 10 frames per second, lol. Serious though I'm not to big on this 30fps craze of the last two gens. No reason they can't strip these games just a bit in their final stages and get them to 60 (or even a middle ground of 45.) I always hear 30 or 60, why not 45. Seems like 30 is close when it holds, so why not 45 everything?

Fallout 4! PLEASE! 3 was one of my favorites last gen.

it better be fallout

Probably Fallout 4 but if they announce Elder Scrolls 6 I wouldn't be mad. TES is their well know title, I don't think they are gonna wait to plant that flag in current gen.

Who cares lol With so many games coming down the line, either title would surly blow everybody's mind. 2015 is going to be nuts and I have a feeling that 2016 is shaping up nicely too.

Will Bethesda's next game be released on PS3 and 360 along with the current gen?

Whichever one they bring out, they're both going to be broken piece of toys! The last fallout and elderscrolls were so broken I gave up on them, imagine how they'll be like this generation when most companies are bringing out half finished broken games.

Didn't have many problems with Skyrim gunner but Fallout: New Vegas was rushed out for sure and full of bugs. A huge shame as when the bugs are fixed its actually a rather fine game.

Bethesda cant take full responsibility for NV though, they didn't make it after all. Bet they are glad about that ;)

Id rather play Fallout 4 as I am more a sci-fi than fantasy fan and Skyrim was last out, however I would settle for either.

Megaton - it's gonna be both.

I want a PS4 remaster of Skyrim and Elder Scrolls 6. Never cared for the Fallout games.

I love both but a new IP would be welcomed.

Skyrim was bad. Fallout 4 next.

i would personally prefer Elder Scrolls 6 , but it will most likely be Fallout 4

Agree 0Disagree 0
▼✖-+
SPAMInappropriate
Show all comments (40)
The story is too old to be commented.
30°