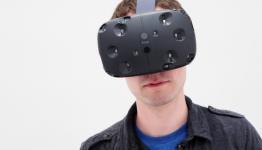 Why I refuse to believe VR is the future of gaming

Virtual reality was all the talk at the Game Developers Conference this week. From Sony to Valve to Oculus to Sulon, a slew of companies showed off virtual reality technology that they say, will carry us well into the future.

VR is not the future of gaming, is just an option for gaming nothing more nothing else.

Its A future of of gaming

VR has been the depictions of future fantasies for decades now. Movies, books etc have all assimilated it.

Morpheus and Rift are only the first renditions, they will only keep getting better from here on out.

Gaming will always be best on your television

"Gaming will always be best on your oscilloscope"

"gaming will always be best on the PDP-1"

VR has a much better chance at becoming a success in the entertainment industry than ever before because the optic technology has greatly improved within the last decade.

Also, to make VR a reality it needs the necessary hardware power to render scene that are lifelike to the naked eye. This was something that wasn't available a decade ago, but it is now.

Of course, VR technology has failed number of time time b/c it was lacking on certain technology that weren't good enough, or there wasn't any manufacturing methods to make the parts for VR affordable. Like the screen for instance.

Screen that has a Back light/edge light/etc weren't good enough to have the proper VR experience, which have resulted to very bad latency/lag.

Truth of the matter is we have the tech side covered to make VR a hit.
My only concern I have with VR are the amount of games it will have.

However, i still believe VR will succeed because of the amount of you tube vidz I've recently seen. I've watched grandpa and grandma laugh their head off when they put on oculus headset for the first time. Not only was I taken by their reactions, I was extremely fascinated by how they enjoyed VR when they weren't even in to gaming. That tells me a lot that VR is not only for gamers, its for everyone because VR taps in to the one thing that we all have experienced before, EMOTIONS.

VR has been around for a LOOONG time. 3D has also been around a long time. They both survive, but are niche markets. Just like 3d, VR will ever become the future of gaming, just its niche carved out of it.

You never know, could catch low wildfire if the price is right

It's only a matter of time. If this wave doesn't usher in the revolution, perhaps the next wave will, or the one after that. It's just a matter of having the tech to deliver on the idea, and the acumen to execute on it. It's not just about gaming, VR/AR have extensive applications to education, rehabilitation, psychiatry, public safety, communications, et cetera. Basically every field can benefit from the advancement and adoption of VR/AR, and gaming is the most likely to take the first significant steps.

VR is not some gimmicky tech like stereoscopic 3d was. Its a brand new medium entirely. It will be used for all sorts of experiences not just gaming.