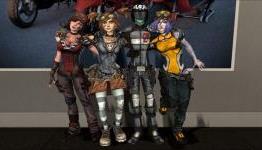 One Angry Gamer "Modding never sleeps. Modders love tinkering with new possibilities, new content, new weapons, stages and characters. In the case of Garry’s Mod the highlight of the game (even though it’s more like a user-friendly software design tool) is that it’s open to include a wide array of content from all sorts of other games. Just recently a modder added Gaige The Mechromancer from Borderlands 2 into Garry’s Mod… and yes, she’s available as a playable character."

Adhttps://store.steampowered.com/app/1488200/Symphony_of_War_The_Nephilim_Saga/?utm_source=n4g&utm_medium=native&utm_campaign=sow_n4g_native&utm_content=png
- Comments (0)+ Comments (0)
TopNewestOldest
The story is too old to be commented.
70°7

Will S&Box Be in Direct Competition with Garry's Mod?