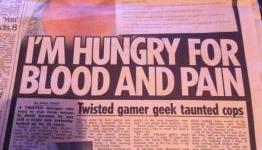 British Newspaper Links Would Be Murderer With Video Games…Again

The Sun newspaper, famed for it’s lies and lack of credibility, has been up to their usual tricks once more.

Even though the publication hosts it’s own video game section, it’s always partial to a pot shot at the culture/industry. From calming ISIS use video games to recruit, to blaming violent video games on youth crime spikes, The Sun knows no bounds. This time around they’re shoehorning in video games into a recent story about a murder.

Swear the sun does this st least twice a month. Such a scummy newspaper

The sun BS its the sunday sport you need :p

Fortunately this paper has the reputation of being a total rag of a thing. Their audience will eat this kinda shit up though, sad really.

Calling The Sun a newspaper easily falls onto the fantasy genre... they're more like trashy tabloid fmainly used for today's fish & chips wrapping

No one should ever listen to anything that the Sun writes because it is full of rubbish. The entire paper is full of stories and "news" that help drain away intelligence from its readers. The best thing any of us can do is ignore the paper and also tell everyone they meet not to read or support this pile of crap. Guys don't read it and give the website views because this is what they want.

There's no link to their site anywhere in the post, just a photo of the article they posted

And why the hell should they include links and give the sun the clicks??? You do realize that we are all gamers here right?

The paper that reported on the front page that Freddie Starr ate my hamster.

I thought most people only bought that paper for the boobs anyway.

While The Sun is an absolute joke of a newspaper, the link between videogames and violence does exist - believe it or not. Each case judged on its own merits, but suggesting some violent videogames dont encourage or reinforce violent behaviour in some individuals is just naive. Vidoegames played to the level of a lot of the population is NOT a healthy pastime.

Any form of media can reinforce violence in certain people. Heavy metal music was blamed not long ago as well as slasher horror films. Even the manson family blamed the beatles! But these mediums as a whole dont cause violence.
If someone has violent tendancies they will still be violent if you take away that persons playstation.

Violence in the U.S has dropped every year since 1982 (the same year that the nintendo entertainment system was released) Also Japan has the lowest crime rate it the modern world yet they play 4 times more games than the states or Britain.

So using those facts I could just as easily say video games create peace. I know thats bull just as your argument is

Yes, Japan - but their taste in videogames are very different than GTA or COD. Houses in which semi-realistic violent videogames are the norm usually aren't great ideas for any adolescents, only leading to reinforced stereotypes. Let's face it, the majority of the best selling videogames are exactly good examples.

You still havnt answered on why violent crime has dropped year on year since 1982 in the USA. Maybe kids are killing prostitutes in GTA and not in real life?

If you think the Japanese only collect mushrooms and jump on turtles you are mistaken. Japanese games are very violent and often very twisted. The only difference I can see is western games are more gun orientated , but violence is violence all the same.

My argument is this. If you have violent tendencies then any form of media whether it be a film, song, book or yes a video game can be blamed. Take away all of the above and that person will still be violent.

I have played all types of games all my life and not once have I ever wanted to rip someones heart out after playing Mortal Kombat or jump on a turtle after playing Mario.

I remember back when I was a kid one of the kids off the estate got in trouble for kicking a hedgehog around a field. That kid never played video games he was a bit of a loner he would rather poke dead birds with a stick! If I ever hear that kids name in the press in the future I am sure it wont be for good deeds. What will they blame that on?

There has never been a scientifically proven case against games.

I imagine you have completed a scientific study to reach your conclusion, which of course counters this recent study

Thought I would just leave this here.

Get a load of Professor higgins78 over here

'Metal Gear: Ghost Babel' – A Legacy Left Behind on the Game Boy Color

Why Timed Rewards Are Bad for Players

Video Games Are A Poor Representation of Paleontology, Says Report

Dunkey Wants To Be A Publisher. As A Dev, I’m Concerned