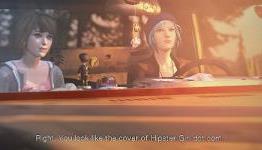 PSLS: At PAX East 2015, I got a chance to check out Episode 2 of Life is Strange, which, according to the developers, will come out sometime this month.

While I was only able to experience a small piece of the episode, it carries the same indie theme and artsy feel that we here at PSLS liked so much in the first episode. Some new locations will be introduced, and some new characters will also be entering the game. The developers also mentioned that players will begin to feel the outcome of some of the bigger choices that they had to make in Episode 1.

Adhttps://store.steampowered.com/app/1488200/Symphony_of_War_The_Nephilim_Saga/?utm_source=n4g&utm_medium=native&utm_campaign=sow_n4g_native&utm_content=png
- Comments (0)+ Comments (0)
TopNewestOldest
The story is too old to be commented.
340°95

What Can We Expect From Life is Strange 4 and the Future of the Series?