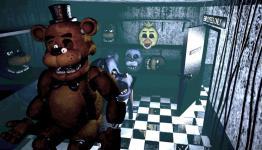 Vgamerz writes: "Five Nights At Freddy’s 3 was released last week. If you’ve been following the series, you’ll know developer Scott Cawthorn loves hiding all kinds of hints within the games about the dark past of the Freddy Fazzbear’s Pizza franchise. But who has time to hunt for Easter eggs when you’re flat out just making it through the night alive? Here’s a list of the interesting things you probably missed:"