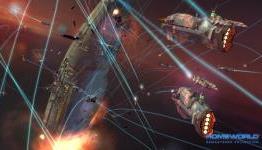 "Homeworld Remastered Collection is the two Homeworld games (not including expansion packs or spin-offs) rebuilt in the Homeworld 2 engine with a bunch of HD upgrades. The series is re-released by Gearbox Software and was originally developed by Relic Entertainment. Homeworld is a Real-time strategy series that sees players controlling a fleet of star-ships that are the last people of their kind on a journey to find their original home planet, as described by an ancient rune found in a mothership wreck on their planet. The second Homeworld continues the story and expands on the lore presented in the first. The collection also includes the original untouched versions of Homeworld and Homeworld 2." - Attack On Gaming