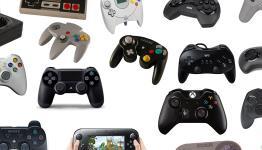 The 5 Worst Controllers Within The Evolution Of Gaming

From EGMR, "Console hardware has come a long way over the past few decades and controllers have followed a weird and wonderful evolution that has been marked with many failures. Many of these failures throw caution to the wind and any concern for ergonomics seem to be far away from the minds behind these abysmal torture devices. However, what can be thoroughly examined is the ludicrous nature and conceiving of some of these controller abominations, and the implications they have had for the poor gamers that had to utilise these badly designed tools.

I actually liked the Duke :\

Same, I loved the Duke. Just looking at the controller takes me back to the Halo 1 days

Remember going to a friends house when the Xbox first came out and he got Halo with it, was amazing!

Same here. Although once I heard someone say that it was like playing while holding two potatoes, lol.

I liked it, too, except for its weight. BUT, I tend to rest the controller on my lap anyway, so it didn't bother me much.

N64 controller is easily the worst out of all mainstream consoles since. And it's nearly impossible to find one that still has a perfect analog stick

The N64 controller was pretty sweet, I remember making Mario walk and then run in Mario 64.....it was so cool at the time.

Lol that jaguar controller was horrible, playing AVP was hard enough without that thing.

Take note N4G, you need more articles like this and enough with the b.s. console war flame garbage.

The N64 was comfortable, but the design was silly. You couldn't reach all of the controls well using both hands without bringing your left hand completely off of it.

Poor "L" button and the Dpad...they didn't get any love as a result.

I have a personal hatred towards the N64 controller, so much pain from those blisters in my middle of my palm

N64, pokémon stadium was do painful!

And my least favourite, the ds3. That controller hurts my hands.

As a 42 year old who actually owned the 5200 back in the day. It wasn't just the analog stick that wouldn't center itself. The rubber around the analog stick would tear and break off after a while, but the main issue with the controller were the buttons. After about three weeks of use the buttons would stop working. I would then have to take apart the controller and scratch the circuit boards under each button with a coin. Making the contacts more sensitive to the buttons touch. It would help, but after a while they would stop working again. I went through five controllers. The last two had to be purchased through the mail because they weren't making the console anymore. All of them had the same results. Some good things that can be said about the controller. It had one of the first analog sticks on a controller and the first start, pause and reset buttons.

I really hated the Jaguar control, and still do - it's pretty hilarious. Terrible d-pad. No shoulder buttons. A thousand tiny buttons on the front with printed clip on templates.

Not sure how anyone thought it was a good idea.

Sorry, but the Steel Batalion controller is pure awesomeness.

No but seriously, the Duke doesn't doesn't belong here...substitute the N64 controller?

I did have a jaguar and the controller was really bad, only game worth playing on the machine was AvP.

Everyone has a favorite. The only opinion that matters is your own.

The Duke which I prefer to call the hamburger pad actually is quite nice to hold, really grippy with intuitive/easy-to-reach button set-up.

Honestly it shouldn't be there.