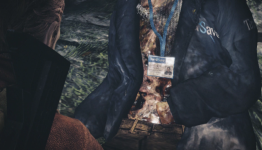 DoubleToasted :
Contemplation, the second episode of Resident Evil: Revelations 2 starts with Claire and Moira encountering some of their Terra Save co-workers, who just so happen to share the same irremovable bracelet. We’re told the bracelet is part of an experiment being conducted by the Kafka-quoting voice, who previously introduced herself as the Overseer. While the Overseer watches and sabotages Claire and Moira’s attempt to escape the island, Barry, too, is being observed, only this time, his observer is physically on the island with him.