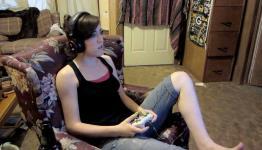 In the Documentary ‘GTFO,’ Female Video Gamers Fight Back

In the documentary “GTFO,” Jenny Haniver is relaxing in her living room in Wisconsin, thumbs on her Xbox controller, settling in for another session of Call of Duty. But when her fellow online combatants discover that the shooter in their midst is, to their chagrin, female, the comments commence. One player takes potshots at women — they are poor game players, they can’t drive — before commanding Ms. Haniver to leave the game.

I've been in enough call of duty lobbies to know that..

Guys really do say dumb shit like that to girls.

Girls get super flirty if a guy sounds hot on his mic.

Girls turn on their mics for attention yet have a attitude at the same time.

A lot of the time guys are nice aka thirsty around girls.

Everyone Is a wannabe racist and sound stupid trying to talk shit.

And so much more, no gender or race is a solo victim of bullshit.

The whole internet is full of stupid people, no matter what game or site it is, I dont even use a mic on games anymore because of the amount of idiots there are.

I think its kinda funny tho when these woman that play games say they just want to be treated the same as the guys, if that were true why call yourself girlygamer or gamergirl or pussycatgirlygirl or heyimagirl. Getting abused online is not a gender thing at all everyone gets it not just girls.

Girls are addicted to attention, when the attention they get turns out to be negative they get all butthurt.

^ That's insecure. There are people of both sexes hungry for attention then get butthurt when it turns negative. Don't be ignorant and think that the 10 year old boys screaming racial slurs are any less guilty of it, and remember that for every girl with a mic there very well could be 2 or 3 without one.

I don't get the issue here. Do you want this to focus more on the general online gaming abuse? Or are you saying its not a big deal?
I have thick skin, I get called N word a lot when i'm on mic on lots of games, it doesn't bother me, but it is an issue that goes beyond gaming and I don't think bringing attention to it will help ( same goes for this documentary).I don't think you all are trying to defend it, but I can't help but feel that you all are just trying to shrug it off.. I get that,I shrug it off too, but if you're shrugging it off, it means you don't care,but if you don't care why do you all have the issue you have with this?
You know what I mean? Its like you're saying you don't care but you want it to be different.. it doesn't make sense.
I don't mind bringing this issue up but if you're going to talk about this issue, talk about the entire issue.They are just trying to push this agenda that women get attacked in gaming because they are women.

Yeah they're basing this off of CoD online lobbies which is arguably one of the most immature player bases in gaming, obviously they'll see stuff like this.

Looks like NYTIMES is at it again. Keep beating the dead horse. Notice these "journalist" pieces always feature a name rather than a subject.

And for those interested in this wonderful "Journalistic" outlet just involved themselves in some very "objective" politics. Regardless of what one thinks of the individuals this is wrong.

That's pathetic. It blows my mind that so many people laugh off anyone saying that the media has a liberal bias.

They cropped him out? They did an image merge, of which the entire right part of the picture was from the Martin Luther King rally. Someone would have had to go.

If this is your evidence for a left leaning media, try harder.

That being said, I think pretty much everyone agrees that the Times are liberal.

ATTN: Female Gamers, find an online community that caters to what you want and need.

Sick of immature, childish morons shouting the "n" word and other expletives? So was I.

I joined a community that doesn't involve them. I haven't heard that stupidity in so long that I forgot that it happens.

It's like hearing people complain about "pop ups." I forgot they existed too.

It's weird when common sense becomes the answer to someone's problems. Similar to when a song that has content you don't like is played on the radio, you can press "off." Or a game has something you may find offense, you can "not buy it."

There's also this thing called a mute button that you can use. I'm not a girl, but if anyone is annoying on my headset I mute them instantly. I honestly don't see the issue here.

You're first problem is that you're playing call of duty. People are toxic on their no matter what your gender or race is. Welcome to the toxicity of the call of duty gamer community.

and every other guy that could help her along from what I have read.

Not to mention, Zoe snaked out a charity corp. for women gamers.

This article makes no sense. Every1 gets potshots from trolls not just women. Why not just be realistic? 1 thing I have to say to this documentary/article...GTFO

I don't think the author knows what "chagrin" means.

Where is this mysterious enclave of female gamers? I'm 31 years old.. Never known a girl that gamed and I can't remember the last time I ever heard a girl on a mic. Yet you come to the Internet and there are these girl gamer articles... I don't believe they exist

It's true. They do exist. They tend to ignore trolls and go find places to play where others treat them like people. I think the intelligent ones realize that many people on the internet just act like idiots, and like in real life, if someone disrespects you you tend to ignore them in the future. Most of them don't make a big deal of their gender either, just like most guys don't go around saying they're male gamers every chance they get.

I've heard multiple sources state that over 40% of gamers in this age are female, they absolutely exist.

That statistic is only going to get bigger as time goes on...videogames are the single biggest entertainment industry in the world...it hasn't been a "Boys Club" since the 80's.

I'm pretty sure the 40 percent counts mobile free to play games... Anyways my point was you see female gamer articles every day in a disproportionate way to those actually playing on systems or pc

while the number of female gamers is increasing (and while I would like to see more girl gamers), those numbers are highly disingenuous.

Those statistics include games like candy crush and farmville. So the actual statistics for hardcore games are far lower. Anyone who is active in gaming knows that girls definitely do not make up 40%. That is just ludicrous.

Oh look; the page doesn't have a comments section. I guess they're afraid that someone might come along and...GASP! Check their facts!

oh yay. More propaganda to further the moral panic against gamers, demonizing us as misogynists who sit in basements and seek to destroy women at every turn. We exist to kick women out of the hobby and out of the industry, because we carry such seething hatred for them.

Meanwhile, in reality, gamer girls are the ultimate paragon of what male gamers find desirable. Gamers throw money at them, white knight for them, compliment them and follow their channels and blogs. In MMOs, guys shower them with items and help them with quests. Gamers idealize gamer girls and lament the fact that there arent more of them.

That is what the actual climate is. But these feminazi demagogues and SJW journalists want to paint the gaming community as a horror story, that way they can be the valiant "activists" to fix it. All while their ad revenue rises faster than the patreon accounts.

And people wonder why gamergate exists?

they dared to mention zoe quinn. she got backlash for banging everyone in the gaming community, not for being a chick. calling her a game developer is reaching a bit, also.

I really have nothing to say about this that I haven't already said countless times before, so instead I'm going to just leave this here in the hopes that the ability to think will be used.

And that was written by a woman. This is who Cathy Young is.

also its funny how they act like "female gamers" as a whole have collectively joined them in their farcical crusade. When in reality, there have been thousands upon thousands of female gamergate supporters and women who dont buy into this idea that gamers are a bunch of evil misogynists. This is why #NotYourShield exists. Because these feminist clowns dont speak for all women. But women and ethnic minorities who oppose SJW brainwashing have been consistently ignored, blocked, and harassed by these feminists and SJW journalists. The hypocrisy on display is nauseating.

This got old years ago. I'm just wondering: how long will it take before this propaganda dies out?

After Hillary Clinton loses the democratic nomination for presidential candidate. They have to cover up her failures and latest felony somehow.

The liberal propaganda strikes agains, not only women are victims.
When a man gets this treatment, it's called trolling, for a woman it's called harassment.

You go girl! Don't let anybody keep you down.

A wise person once told me never to go where you weren't welcome... there are shitty people in certain places... unless we start opening death camps with special showers, they'll always be there.. not much you can do really.

This kind of stuff is unacceptable, as with online harassment in games in general.

Games are fun, and anyone who wants to play should be welcomed to do so without being degraded.