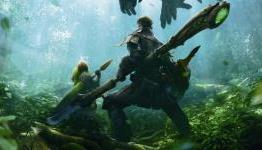 Vooks: The Monster Hunter series is one I’ve always admired from afar. For the longest time, I understood that it was a huge game in Japan, as well as relatively popular in the West and this was for a good reason I just hadn’t discovered yet. The first Monster Hunter I ever dipped my toes into was Monster Hunter 3 Ultimate on the Wii U and for a time I found it to be an immensely satisfying game but also one whose mechanics I found difficult to truly understand. It felt fantastic to emerge victorious from a hunt, but the game assumed a lot of prior knowledge and so I never quite penetrated the depths of hunting technique and shortly lost interest. Along came Monster Hunter 4 Ultimate on the 3DS which I suspected would suffer the same fate, but which instead has identified some of the shortcomings of past games and improved the experience for new players remarkably. I finally feel like I completely understand why Monster Hunter’s fans are so enthused about the franchise.

Adhttps://store.steampowered.com/app/1488200/Symphony_of_War_The_Nephilim_Saga/?utm_source=n4g&utm_medium=native&utm_campaign=sow_n4g_native&utm_content=png
- Comments (0)+ Comments (0)
TopNewestOldest
The story is too old to be commented.
50°8

10 Current-Gen Games Everyone Should Experience