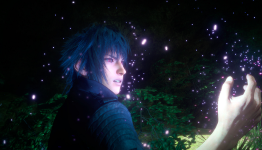 Kotaku:
I just spent two hours playing Final Fantasy XV, which I can confirm is a real video game that actually exists. The good news: it's brilliant in a lot of ways, and from what I've played so far, it really does feel like a Final Fantasy game. The bad news? Well, it's got some serious technical issues, and I'm worried it's too ambitious for even today's current-gen hardware.

First, some context. At PAX East in Boston this weekend, the folks at Square Enix invited reporters to go check out the FFXV demo, which is finished and will be released for PS4 and Xbox One on March 17 alongside Final Fantasy Type-0 HD. (You have to buy Type-0 to get your hands on the demo, of course.)