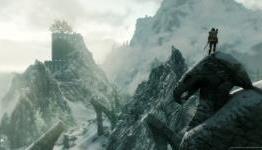 The first thing Paul Tassi did when he got his new gaming PC set up was to use Internet Explorer to download Google Chrome. The second? He downloaded Steam and installed Skyrim straight away.

He did it as a test of sorts. He’d never played Skyrim on PC before, because his past computers have always been too terrible to handle it. So heI felt an immense amount of satisfaction when he booted it up for the first time and saw that the game defaulted to Ultra High graphics settings. That was a first.

But what was meant to be a simple test turned into a weeks-long journey back into the world. He found that after playing through the first hour, a wave of (four year-old) nostalgia hit him, and he didn’t want to stop.

Makes me want to play Skyrim again. I would buy a PS4 remastered version in a heartbeat!