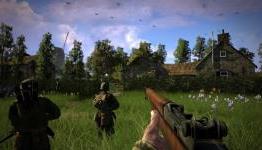 What Happened to WW2 First-Person-Shooters?

GamerBolt: "In my opinion, it won’t be long before we see a flurry of World War 2 first-person-shooters, and in 4 years’ time we’ll probably hoping for a return back to a futuristic theme, again. Either way, exciting times await."

Exactly right. It wasn't just fps games, though. Name a genre and WW2 was there. It was cool for awhile but they kept hammering the same thing over and over and over (sound familiar?) and I think it really broke free when modern warfare came out. Then it was clear the shift was made.

Now we need a break from the brown military shooter.

I personally never did and haven't really enjoyed the modern shooters (Only cod4 and Bf3). Would rather have a WW2 game any day over these wanna be cod modern shooters. CoH 2 and Red Orchestra 2 are the only stand out WW2 games recently.

so true I never enjoyed these modern war story. I have to admit there was a lot of ww2 games but they actually were enjoyable. miss those games

The weaponry in the WW2 games is way more balanced.

The MW games have weapons which take the fun out of the game.

Not exactly WW2, but there was Wolfenstein recently.

I think after the bookoo numbers of Metal of Honor games in the early 00's, people have lost interest in the WW2 era. Sci-Fi has pretty much taken over the FPS genre lately as there is more freedom of content and story.

People were tired of WW2 games towards the end of the 6th gen and beginning of the 7th gen so Devs moved onto present and future settings. Now that we have had a ton of games in those periods people are looking to go back to 20th century wars. There are some good games if you look hard enough.

So if you're looking for good WW2 games that have come out recently you should check out the last couple Sniper Elite games, Enemy Front I heard was pretty good and you can find it for under $30, Wolfenstein: the New Order was alot of fun even though most of the game takes place after WW2, Company of Heroes 2 was a good RTS and if you are looking for WW2 free to play games then you should try War Thunder and Heroes & Generals. There are also some good WW1 games like Verdun and Valiant Hearts: The Great War which is a 2D puzzle game that got great reviews. Giant bomb is a great website if you are looking for games from a certain period.

I want a complete remake of MOH Pacific Assalt! One of my fav WW2 games!

I don't want HD remakes, I think its just a money grab. sure its nice for some games. But honestly this game needs a complete remake! Ground up!

This game introduced me to Online Gaming !

Last ww2 game I got into was day of defeat.. Tons of fun..

I'd be up for more if done well

Wolfenstien: the Old Blood will be out in May... it might be the least-realistic portrayal of WWII since 'Inglorious Basterds', but it looks like fun.

I think Dice have already confirmed BF5 will be modern day , shame really could do with a change .

EA will not allow that. Now if Actvision put Treyarch to make WAW2 and the gamer was a blowout hit, a Battlefield based in WW2 would follow.

I would rather go backwards instead of into the future.

Haven't we had enough of going back to WWII for shooters?
Don't we have a whole bunch of sci-fi and fantasy settings that remain un-used in that genre that we could be relying upon?

There was a time when every shooter on the market was WWII. It got very tired. Maybe zombies will follow suit.

Then the devs all had a meeting and decided that was one game too many.

I'd personally love a new Brothers in Arms.

Because killing nazis is boring and stupid.

The holy trinity of gaming enemies, and I love to kill them all.

Modernized warfare killed it because companies only follow the leader.

I would love a gritty WW2 third person shooter done by the guys that did Spec Ops: The Line (hugely underrated game)

That would be epic

Heroes and generals is where it is at for your WW2 fix .

We need a good Conflict game - desert storm 1 & 2 were amazing the global terror was great also but sadly Denied ops was a little underwhelming.. hell even just an HD remake of them all on one disk would be awesome.

More Vietnam based games would be awesome... And how about rather than just do more COD style WW2 & Vietnam themed games...they go back & check out what made the 1st couple of Medal Of Honors so great.... with that awesome espionage type gameplay, of infiltrating enemy info & meeting, by stealing enemies uniforms & credentials... I can't remember the exact formula, BUT, I remember playing the 1st Medal Of Honor, on PS1 & thinking this is the way forward for 1st person shooters & war based fps's. BUT, they totally abandoned the awesome way they were going, in favour of straight out, bland, soulless shootathons, that are multiplayer focused, & single player campaigns are an afterthought... or as in Titanfalls case...NON-EXISTANT... Really annoying for me, as a lover of single player campaign type games....to see that potential & what the future may have held, in regards to that Goldeneye, MOH type, smarter fps campaign based gameplay....

I mean, the options for a Vietnam themed game, is even greater than WW2, as you have enemies that were sending kids to suicide bomb in bars, in U.S. soldiers, supposed downtime..... enemies that had underground caverns dugout everywhere, whom also had landmines & intricate booby traps EVERYWHERE...These guys were the basis for every future enemy, on how to defeat a HUGE country like America & there allies, when they invade your country & try dictating terms, when the fighting should stay inhouse.
The gameplay possibilities for BOTH single & multiplay would be vast & awesome.

I was thinking the same thing about Vietnam era games. There have only been a few good ones. I don't remember the name of it but there was one on pc a LONG time ago that was squad based and it was great. Plus having the lush jungles for scenery instead of brown and gray beaches and run down cities that are in every ww2 game would be a nice change of pace. I didn't think about all the booby traps, that would be an awesome touch.

COD2 was an amazing game. Sometimes it was very frustrating but damn it was fun.

I personally never was fond of WWII shooters. Castle Wolfenstein as an exception. But pretty sure they will come back sooner or later. There are allways trends.
In them moment it's the revival of oldschool RPG and Sci-fi and space settings ... love it!

WW2 shooters are great if the war atmosphere and the gameplay feels diferent than other shooters like Sniper Elite and Wolfenstein.

Give me "Brothers in Arms" remake, or make a new one for XO or PS4 please...

What about a WWI fps game? I'm sure a talented developer could make a good one. Trench warfare, gas attacks and countless soldiers mowed down by machine guns. Also, a football game at Christmas.

Dude go onto Steam and look up verdun :)

Sniper Elite 3 is a still WW2 and it is fairly entertaining.

Did everyone forget about Enemy Front that came out last year? it may have only been on Ps3, 360 and PC but it was still WW2 and was pretty fun

Time to bring them back, just don't let Treyarch or Infinity Ward make any.

Agree 0Disagree 0
▼✖-+
SPAMInappropriate
Show all comments (40)
The story is too old to be commented.
50°Fresh3