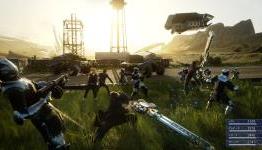 PAX East 2015: How Back to the Future 2 Influenced Final Fantasy XV

IGN - In the Final Fantasy XV World Building panel at PAX East 2015, we learned that the much-anticipated RPG drew influence from an unexpected source: Back to the Future Part II.

The panel focused on world design, and was led by two of XV's lead game designers. Wan Hazmer, who leads the Buddy team focused on the interactions you'll have with your AI pals, and Prasert Prasertvithyakarn, head of the Culture team working on the civilizations and towns that you visit throughout the game. The latter of the two brought up Robert Zemeckis' incredible sequel.