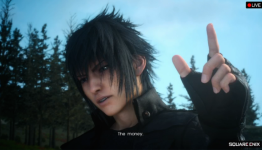 Wired:
Final Fantasy XV is arguably the most eagerly awaited entry in the series ever -- if you count the early buzz from its original announcement in 2006 as Final Fantasy Versus XIII, at least. After years of shrouded development, during which the game has switched titles, platforms, and directors, WIRED.co.uk at last got to go hands on with an early test of the Episode Duscae demo, finding it a radical evolution of Square Enix's beloved RPG franchise.

Kingdom Hearts and Dark Souls similarities? Count me in.

actually famitsu flat out named him later on.
at the time of the post it was still a rumor from dengeki

The more I read about these short playthroughs, more more I'm getting a feeling this will pay off big time, only less than two weeks till I can give it a shot myself.