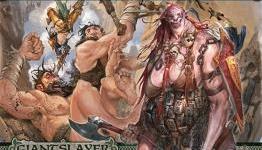 An army of giants march into the Pathfinder roleplaying game’s newest adventure path. Giantslayer is a new 6-part campain that launched with the first installment, “Battle of Bloodmarch Hill.” Since then The second installment and poster map folio have been released but fear not there is plenty of time to get your campain rolling. This adventure will not be finished until July 2015.

I could not agree more and Pathfinder is a great addition to these games. I have had so much fun and its brought back so many memories of my child hood. :p

I love the Pathfinder system far more than the D&D 4.0 system. Glad its getting out there for more people to check out.

The Adaptive Horror 'Sound Of Silence' Now In Development