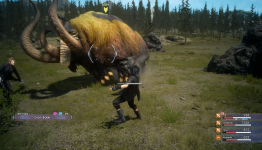 GamesRadar - Depending how you see it, 17 March (20 March, for our UK readers) sees either the arrival of Final Fantasy Type-0 HD with a free demo of Final Fantasy XV, or the arrival of a Final Fantasy XV demo with a free copy of Type-0 HD. The demo, titled Episode Duscae, is certainly sizable enough to be considered the main event. We know because we played an hour without making a noticeable dent on it. It made a certainly made a noticeable dent on us, however, showing how there are considerable brains behind those boy band good looks.

Um caves were in FF8. You would see squall enter a cave and roam the map until you meet Ifrit at the end of the map.

Don't understand why they would suggest that caves were never implemented in a Final Fantasy game.

Anyways the game has roots from older Final Fantasy games. It'll be a great game nonetheless.