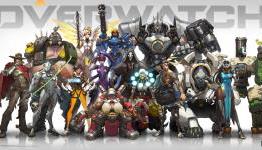 Rhys Egner of FTG: Blizzard’s cooking up some competition for Valve, it seems! As soon as I got on the show floor today at PAX East, I scurried for the Blizzard booth to get in a match of their new class-based FPS, Overwatch. At first glance, Overwatch is kinda like a MOBA; twelve classes (fourteen now, as the build for PAX featured two new agents) put in teams of six to do battle. But in reality, it’s more like Team Fortress, with every class presenting a wildly different (and extremely wacky) way to play.