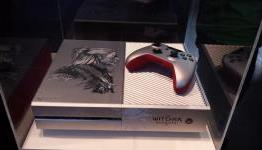 Microsoft and CD Projekt Red team up for an ultra-rare special edition console; one lucky contest winner will get to own it.

Love that silver colour. Does it come with a 1TB internal HDD?

Sorry I really don't have a clue as the specs haven't been announced as far as I know. The console is only on display now at PAX East.

The X1 is a great looking system but I'm not getting the game on the X1. Most likely PC since it comes free with a new GPU.

which means, you're getting a new GPU. I'm thinking of getting one too but still undecided on which one.

I love the colors! If I ever decide to buy X1 I'm going to get a special edition. If...

i don't know whats cooler this or http://www.gamepur.com/file...
think i like the ps4 cause of the gold and i think its a better designed console

Only one of these was made as a prize for a contest at PAX East just like the custom controllers, I believe.

I like the blood red underneath the silver on the controller. Nice touch for a game where you slice and dice from start to finish.

Wow really? I was expecting a retail version.

That is a really cool looking Xbox One.

Thats a beautiful console they should release it for everyone, id buy it within a heart beat.

OMG why cant these go out on sale at retail, this definitely beats any of the special editions sony has put out for the ps4 imo.

why it’s not for all gamers to pre-order

I dam near Slapped my Momma when i saw this till i realized its not for retail.

Lol. I would buy this in a split second if it were ever to be made available to the general public. This is one of the cooler custom consoles I've yet to see along with the MGS V PS4.

It doesn't cost anything.. Worth a shot at least.

Edit: Resolution dont= graphics only trollz believe it does

You registered here a 3 days ago! Marcofdeath, is that you???

I fully i agree. Myself and every owner of KZ shadowfall was fooled by Sony stating MP was full native 1080p till Digital Foundry did a test months later that we realized KZ wasnt 1080 but 720 yet know one could tell the difference till the test

and what happens to 900p?Will it stop the witcher3 from looking fantastic on xbox one? will it stop it from playing great? are you trying to make a joke or just trolling? i don't get it.

900p is a perfectly fine resolution it is actually quite hard to tell the difference between 900p and 1080p in person. 720p on the other hand..(cough*battlefield 4 *cough cod ghosts).. but then titanfall looks nice and crispy on my 1080p tv and that's only 792p..

Resolution does not = better graphics.

It only helps with the clarity/fidelity of the image which you can make up for with good AA effects an so on.

I feel i should mention i have played plenty of native 1080p games that are jaggy galore and look less clear than other 900p titles. See where im getting at here?

You gotta stop being fooled by this numbers game with the hardware and resolution. Its not so cut and dry as the bigger number always = better every time.

There is so much more at play to consider.

In saying all this yes 1080p is a better resolution to aim for than 900p if that is all you are to consider but that does not rule out the 900p image as mere garbage. They can both look great if not completely the same.

I fully i agree. Myself and every owner of KZ shadowfall was fooled by Sony stating MP was full native 1080p till Digital Foundry did a test months later that we realized KZ wasnt 1080 but 720 yet know one could tell the difference till the test

Shut up about resolution and graphics and enjoy this beautiful custom Xbox One!

You speak of that which cannot be done, young Padawan. Geralt is emblazoned upon this Xbox in glorious, shiny, native 1080p. All jokes aside, I completely agree. Some people just can't help themself, though.

looks smart, looks like CDP RED have the same kind of deal with microsoft xbox, that Konami and Kojima have with sony ps4

I could have done without the big ass Geralt face. Cool otherwise.