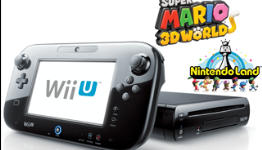 Nintendo is offering a special price on a Wii U bundle, plus a few Wii U games.

That should be more than cheap enough for many.

It really isn't that great a deal, considering the tech you get inside the console. The Wii U is really more like a half-generation beyond the PS3/360, and even then, the CPU in the Wii U is weaker than both those older consoles (especially the 360 CPU, which is way more powerful than the Wii U's CPU). And of course, many expected features that have been in consoles for over a decade, were outright omitted from the Wii U, to make up for the high cost of the gamepad. That is why the Wii U just doesn't get current gen ports, it really can't handle them due to its weak specs/missing features.

Even at lower prices, if you buy into the Wii U ecosystem, you're buying into a platform with far, far fewer games, particularly 3rd party ones. And entire genres of games are just outright missing, with fairly dim prospects for very many future releases of any games in the future.

It really doesn't even seem worth it at lower prices, although I might pick one up when they hit $99 in the bargain bin early next year. Can't think of many games that I'd be interested in, though, but I'm sure I could find one or two if I looked hard enough.

If you want the WiiU why keep waiting and if you don't want it skip it.

You hate the system for the stupidest reasons.
Power doesn't mean jack shit in the face of excellent games, which the Wii U has in spades.
And the exclusives it gets makes up for the pathetically done ports it's had so far, let alone the overhyped bags of crap that have been releasing lately to high sales and low reviews.

Who cares about the console. It has more fun games than the other consoles and that's really all that matter. Own all three

I suspect Wii U might be a little too fun for you..

Dont strain your eyes too hard

I own all three consoles, AND both handhelds. And like the guy above said, Wii U is way funner than the others. Dont believe me? See for yourself- here's my setup: http://s6.postimg.org/rnazj...

Still too expensive for a Nintendo console in my opinion. Especially one that only gets like 6 games a year.

Why don't you go back to school and learn how to count. Nintendo ALONE is releasing about 12 games them selves this year. Plus a sprinkle of third party, Indie, and virtual console games. Try harder next time.

Oh on top of that Nintendo also knows how to support their handheld unlike some other company.

On topic: This is a damn good deal. The industry's highest rated tittles are sitting on the Nintendo Wii U this generation. Deny it all anyone wants but the facts and reviews say otherwise.

You are ignoring the games already released! How funny. And it's 225 dollars for two games, I say it's a perfect price.

wii u is the only family console really.

This is a great price honestly and you feel it isn't worth it. You need your head examined or something.

Damn good deal that cant be beat ..i recently bought smash 4 wii u and couldnt put it down ...my bro was against the wii u since he has a xbox one n far cry 4 n advance ware fare but when he played smash he couldnt stop playing n was asking to buy my wii u just for smash ..this proves nintendo makes fun games like no other

For those who actually LIKE a playing fun games, this is a great deal. For those who refuse to acknowledge Nintendo has fun games, they will bitch and moan and rattle off a list of excuses why this isn't good enough.

Listen we all understand that Nintendo has issues with getting the same 3rd party support as the other 2. But it's starting to get old using that continuously for the main argument. That's like going to an upscale restaurant and asking if they serve fast food! You go to a nice steak restaurant for a great steak dinner and an amazing seafood restaurant for the best seafood. People who are interested in Nintendo games understand what they are getting. Nintendo just has to establish a good profitable business amongst the fast food gamers, that they are fine with being a boutique brand and that their games aren't for everyone.