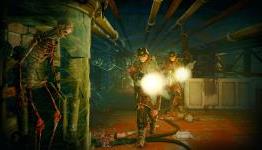 Purexbox:
Zombie Army Trilogy began life as standalone downloadable content pieces for Sniper Elite V2 on PC. The initial release was a fun diversion that saw Adolf Hitler summoning his own army of zombies to help defend an almost-defeated Germany in the final days of World War II. A second edition that followed on from the storyline of the first was released a few months later and now, almost 18 months after that, a third part of the story has been added to round things off, with the whole thing being bundled up into one package and launched on current-gen consoles.