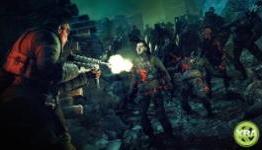 XBA:
Zombie Army Trilogy is the video game equivalent of a B-movie, in more ways than one. A co-op shooter about blasting undead Nazis in their stupid faces, it features some deliberately schlocky horror that has its mouldy tongue firmly lodged in its decomposing cheek. It’s fun! But it’s also kinda rubbish.

Hitler is in trouble. Losing the war and running out of ideas, the mustachio’d maniac falls back on his last resort: Plan Z. Calling on his scientists’ most monstrous creations, he releases hordes of super zombies into wartime Germany. Playing alongside up to three friends, it’s your job to stop them.