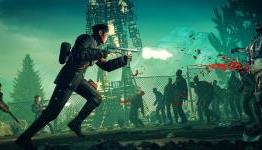 DTOID:
The Sniper Elite series has been around for quite some time, entertaining fans since 2005 on pretty much every platform known to man. But alongside of the core historical-centric games there has been a lesser known sub-franchise known as Nazi Zombie Army, complete with a demonic Hitler and the same sniper-heavy gameplay of the core franchise.

Rebellion Developments has repackaged the two existing games in a brand new bundle called Zombie Army Trilogy, which also includes a previously unreleased third entry. Confused yet? Don't be, because in essence, they're a collection of horde-mode like encounters with mixed results.

Don't know game is like a 9/10 for me. Some games just have that "fun factor" that other games can't grasp no matter how much they try. I personally don't find destiny very entertaining. It's big budget but to me falls flat (it's in no way bad). This on the other hand has a lot of charm. I love it and I'm getting better. I'm 15 on the "dead end" leader board on PS4. Had a 90 kill combo could have gone higher but the team was just overwhelmed by that point. Going for higher this week.

The Legend of Heroes: Trails from Zero Review by Video Chums