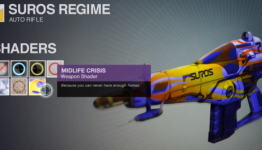 Gamespresso writes: Since launch, Destiny players have asked for a great deal of features in Bungie’s space-roaming epic. From in-game voice chat, to more content, these requests have varied in scope and importance; but they are no more than suggestions, with no visual guide to reference. Now there’s at least one requested feature that we can visualise – weapon shaders.

Destiny has so many aspects to ot that are amazing. Simply put, if it had taken a yr., released only for the next gen, and went all in on the WoW template, ot would now be set up to be one of the most successful franchises of all time.

Even if they had simply included last gen, but built the foundation that would shift to next gen and PC in the future. They could have used the GWs model or the DCUO model, and made a ton of money.

I realize that something of that scope was beyond their timeframe, that they scaled back, they skirted the mmo moniker. But I really think that had they taken the time, and went all in, damn!!! It could still happen, but Im not so sure.

Still fun, but hold ppl like it could have.

Such simple ideas, it blows my mind this stuff was not put into the game. They have 2 DLC's announced prior to launch of the game, all with their own sets of weapons and gear, yet the make such a limited vault. I just don't know what the heck happened over there. The game is SO fun to play, but they could make it unbelievable if they just went deeper.

And it would have taken a year, 1 year :/ I blame Activision