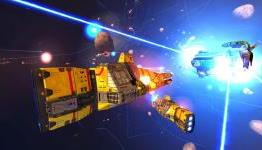 Palmer Sturman: For a pair of games that initially debuted in ’99 and ’03 respectively, the Homeworld games still stand firm as two of the best and most dynamic examples of what can be accomplished within the RTS genre. There’s still nothing quite like the breathtaking epic space battles, and the attention to detail that Gearbox has implemented in this remastered edition is nothing short of awe-inspiring. There are elements of the re-release that don’t quite hold up compared to the constant and almost instant action of more well-known RTS titles, but in spite of the sluggish beginnings Homeworld still remains a pleasure to play.