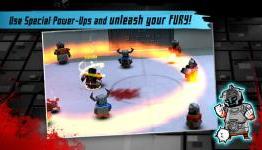 TTP:" Striker Arena is an interesting but flawed mix between sports and strategy games. The basic gameplay mechanics work rather nicely but the lack of actual strategic options and the weird Story Mode progression mechanics are flaws hard to overlook, as they make the game less enjoyable. Some tweaks here and there would have made Striker Arena live up to its potential."

Striker Arena switches from freemium to premium, out for iOS on February 24th